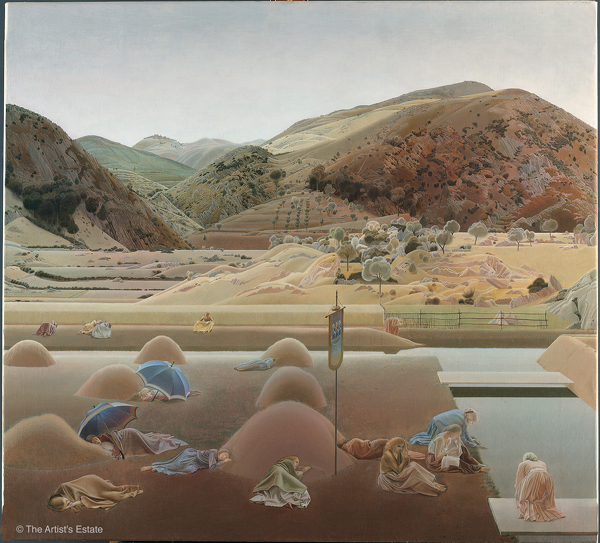 ‘Tomorrow morning I am going right up into the mountains with a mule and a very beautiful cover & some Anticoli peasants to see a miracle which happens every year, at Valle Pietra, in the Abruzzi.’ (Letter from Knights to her Aunt, 1923).
The subject of this painting relates to a pilgrimage that Winifred Knights made to the Sanctuary of the Santissima Trinità in Vallepietra. Inspired by Thomas Ashby, the Director of the British School at Rome, Knights became fascinated by the people and the landscape of the Lazio region, and especially by the village festivals. The painting records female peasants from Anticoli Corrado resting in the lower Aniene valley during the procession to the sanctuary. When the painting was shown, unfinished, at the Art of the Empire exhibition at the Imperial Galleries in 1927, the critic P. G. Konody considered it to be ‘the greatest attraction of the whole exhibition’.
Literature:
Sacha Llewellyn Winifred Knights 1899-1947 (London: Lund Humphries in association with Dulwich Picture Gallery, 2016)
Winifred Knights 1899-1947 (exh. Catalogue The Fine Art Society PLC and Liss Fine Art in Association with the British School at Rome 1995, p. 55)